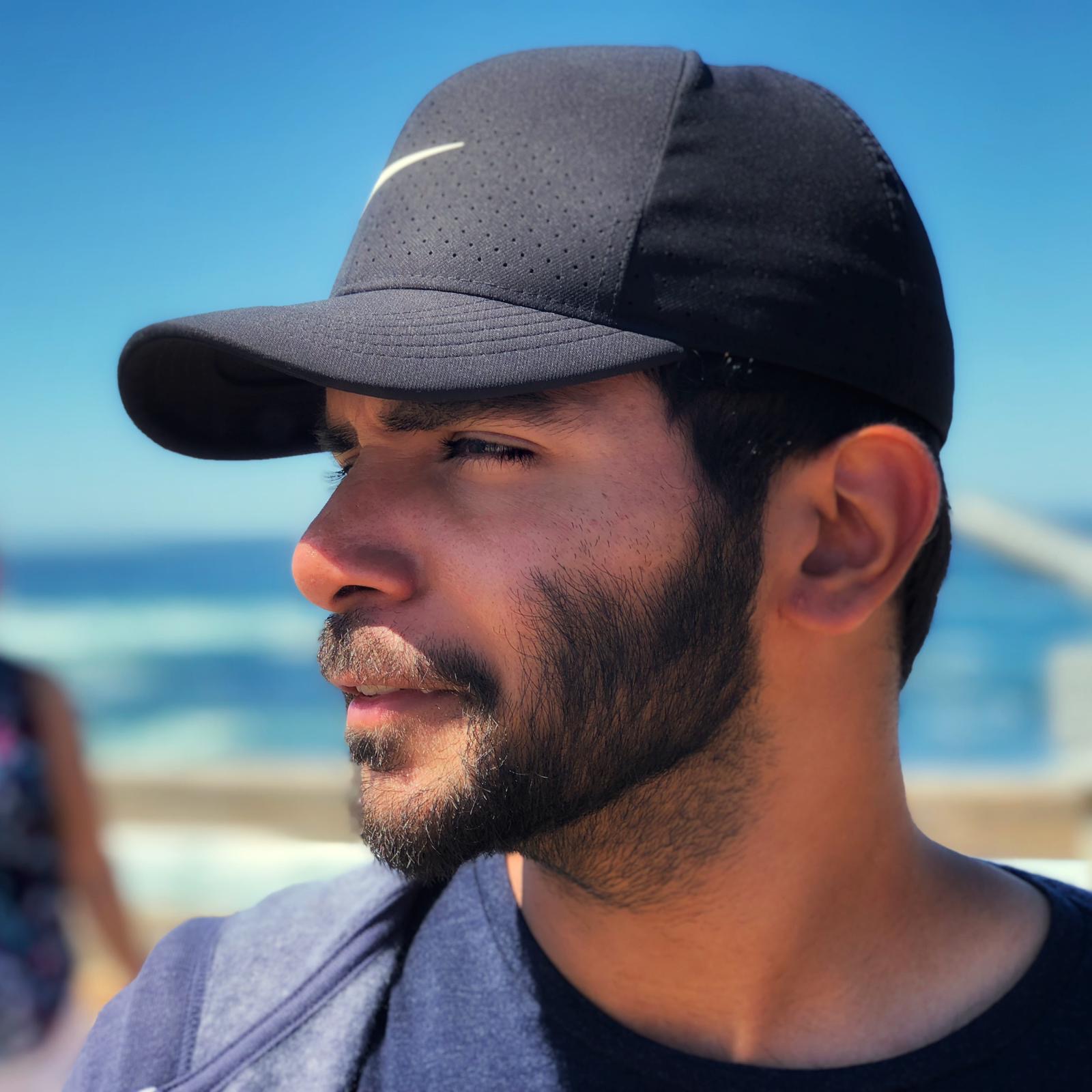 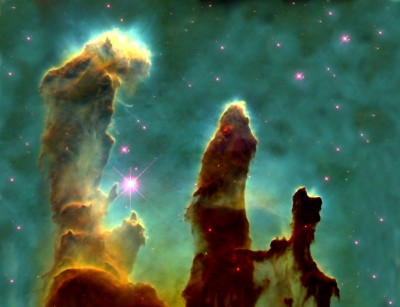 Well this picture was taken through the Hubble Telescope when (heads up!) it, technically, didn’t EXIST.

Wikipedia says  ”Images made using the Hubble Space Telescope in 1995, by Jeff Hester and Paul Scowen, greatly improved scientific understanding of processes inside the [eagle] nebula. One of these, a famous photograph known as the “ Pillars of Creation”, depicts a large region of star formation.”

Our planet Earth would probably be the size of a pixel in the image on the right.

And this formation is part of a much larger area called the “Eagle Nebula” (down below). 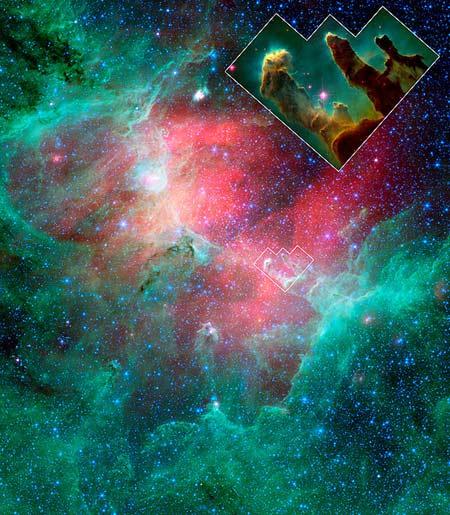 Heads up fellow star-gazers( and others). Maybe you guys will grasp the enormous impact of this.

When they were photographed in ‘95, the Pillars of Creation never existed.

If you’ve ever really understood what light is, and how it travels, its effects, especially at interstellar distances, then maybe you won’t have a hard time understanding that the stars we gaze into on a clear night might not even be there.

The light that we get from them is, for lack of a better word, old. When we look out into space, we are really looking back into time. Because with Space, we are dealing with cosmic distances - distances so mind-boggingly huge that we couldn’t even begin to comprehend them.

To reach something that is a 1000 light years away from us you would have to travel for a 1000 years at the speed of light.

And for us to see something that is or happened 1000 light years away from us, it would take the time it takes for light to travel a 1000 light years. And we would keep getting the images of things which actually happened in the past.

So again : When these images were photographed in ‘95, they never existed.The red glow,a supernova (an explosion inside a galaxy) (seen in the picture above) had already destroyed the pillars.

But at that point in time, our senses recognized as the Pillars still existing. From our telescopes we could see (here, predict-since 2007)  that the pillars will be destroyed by the unstoppable explosion (that threatens the entire galaxy). We just need light from that period to reach us to confirm it. And it won’t, for probably another thousand years or so.

Take this for example : if the sun were to, say magically disappear, we would get to know only after about eight minutes. That is because light from the Sun takes about eight minutes to reach us. We would still be under the illusion that the Sun IS there.

Science apart, this nature of the Universe is truly magnificent and humbling. Such effects are only observed through the vast distances Space offers, and never will be recorded, for instance, on Earth, even if you could observe events on a location the exact opposite of yours on the Globe.

It truly underlines our position, our insignificance in “the grand scheme of things”. Such objects are deemed fixed, intransitive, work of some all mighty powerful being. But its only through such events that we understand how brilliantly the Universe functions. And how less our planet and our preciously fragile lives matter.

Apparently the universe goes on - as much at the cosmic scale as in our normal lives.

The (almost) 5 books that have influenced me the most..

This is part of  the daily post’s post-a-day journal. So here goes!!